I am in Dubai to present at a conference directed by the author of Cultural Detective Arab Gulf, Abdulhamied Alromaithy. His wife, Layla Al Bloushi, will moderate my panel. It’s my first time here, so I’m excited. Today was my tenth anniversary cancer-free, and we planned to celebrate by going to the top of the Burj Khalifa. It was beautiful.

In the morning, however, we walked around the old part of the city. Greg and I were fascinated by the organized chaos of the port. Boats were anchored three to six deep. How in the world did they get out once they were loaded? Packages were stacked everywhere! How did they keep track of what was where? Aren’t there waves in the Gulf? Wasn’t the loading precarious? Here the longshoreman show up in pickup trucks, SUVs and small trucks, to hand-load packages of textiles, boxes of spices, and many, many appliances to be shipped around the Gulf. We even saw electrical transformers.

The boats themselves were absolutely gorgeous, wooden structures brightly painted with filigree and other details. They looked very old. And the men who were working them were so very welcoming, cheerful, hardworking and happy.

The highlight of our day serendipitously became the invitation we received to board and tour an Iranian shipping vessel at the port in Dubai Creek. Our visit was accompanied by tea, lunch, shisha, and some great non-verbal communication that bridged my non-existent Farsi with our hosts’ non-existent English. Thankfully a spice trader helped us out with some translation.

To board the boat we had to climb up a very rickety ladder, then crawl over the side and jump down quite steeply. Our hosts very politely watched out for our safety and were extremely hospitable. They got a kick out of our adventurousness and curiosity. 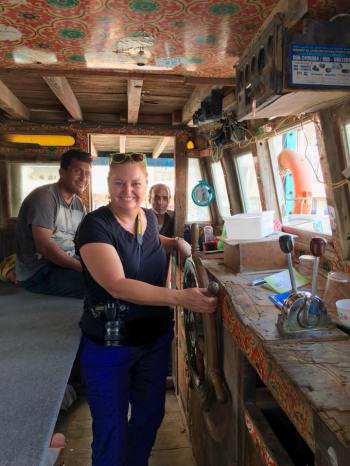 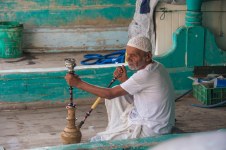 We learned that it takes 15 hours to sail from Dubai to Iran, and that they visit five ports there. Our hosts assured us that even with our USA passports we would be safe and happy. As I have work today, going with them wasn’t really an option to consider.

They showed us the captain’s bridge, the sleeping quarters, below deck where there’s a kitchen and stowage, the roof where there’s more stowage. We were told they bring gold from India to Dubai, textiles from Dubai to Iran, and spices from Iran to Dubai. All of them had been doing this their whole lives. There were also loads of household appliances bound for Iran: washers, freezers, and loads of things made in China.

I asked how they got in and out of the port amidst so many ships. “No problem,” was the answer, as Haziz pointed to a small opening between boats, through which none of the boats would fit. Leaving port obviously takes a lot of cooperation between vessels. I asked how they knew where everything was, to load an unload. “We know.” I guess a lifetime teaches you the order in that apparent chaos. 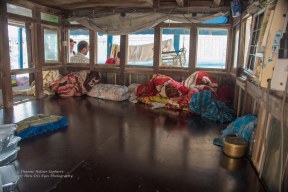 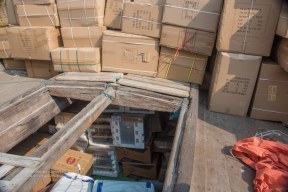 Many thanks to David Benson of www.goexploreae.com, who told us we could go up to the multi-level parking structure across from the port to get a bird’s-eye view of that organized chaos going on in the creek. Thank goodness we did! What a view of both the boats in the waterway and out the other direction! 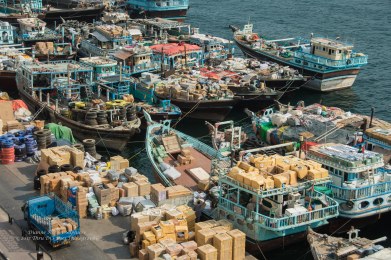 It was a wonderfully full day of cross-cultural interaction. We spent time with Filipinos, Malays, Indians. Not many Emiratis yet, but there is always tomorrow.

1 thought on “Haziz and Our New Iranian Friends”