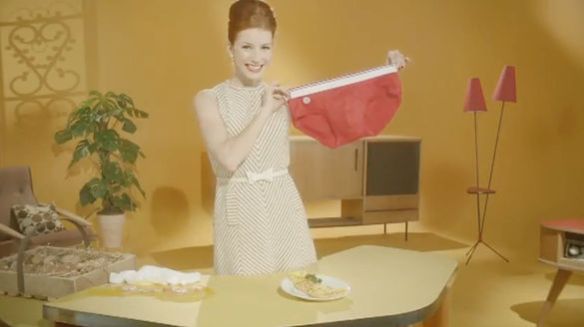 Another guest blog by the wonderful Joe Lurie—I will say that I’m about ready to get on a plane and enroll in Joe’s next class!

As a follow-up to my blog posts, Bicycling in the Yogurt — the French Food Fixation and Ads as Catalysts for Intercultural Conversations, I’d like to share this French ad for men’s underwear, shared with me by a French student:

The ad shocked my Chinese students — underwear in the kitchen? References to a man’s genitals in a TV ad? Not only does it reflect in an amusing and extraordinary way the seduction of food in French culture, it also reveals a theme of sensuality commonly accepted in the French public square.

While there’s plenty of pornography in North America, a French marketing professional explained to me recently that using a bare breasted mermaid to sell an ordinary product in the United States simply did not work. And so, one understands why many visitors to France are shocked by bare breasted women on public beaches. Everything, in every culture, has its own culturally accepted place.

While discussing the French underwear ad, some of the French students noted that to break one’s eggs would often suggest breaking one’s balls — being a real pain. This occasioned a vigorous, animated debate, some French students insisting that breaking one’s eggs does mean breaking one’s balls, others countering with equal force that this was generally not true, rather at best a gross exaggeration. And so in that conversation emerged other common French values and related behaviors, emerging nearly verbatim as they appear in the Cultural Detective French Values Lens — the importance of debate, of challenging ideas, of being rational, of not exaggerating, of being precise. Listen to French conversation and you will hear, over and over again, the words preciser, “to be precise,” and il faut pas exaggerer— “one must not exaggerate!”

Linked to the My Global Life Link-Up at SmallPlanetStudio.

6 thoughts on “The Power of French Food Culture…Even for Selling Men’s Underwear!”