Every May, thousands of Atlantic bluefin tuna (atún rojo) swim through the Strait of Gibraltar at over 30 miles per hour to spawn in the Mediterranean. And for 3000 years fishermen have intercepted the large tuna in a fishing tradition called the almadraba in Andalusia and tonnara in Sicily.

The almadraberos are often sons, grandsons, and great-grandsons of almadraberos, and feel a brotherhood with their fellow fishermen. They tend to be proud and tough, with a strong respect for history and the sea. They catch the tuna by putting out a maze of underwater nets that the bluefin swim through until they reach a final pool, el copo (diagram of a net, below).

Tuna swim east to the Mediterranean, going through various areas of the net until they reach the “copo,” where they are hoisted up out of the water.

Once the copo is filled, the fishermen circle their boats, working together to haul the huge net to just a few feet below the surface—the levantá del atún, or “raising of the tuna.” There are so many tuna jumping around in such a shallow space above the net that it creates the illusion that the water is boiling.

At this point the copejadores assume the treacherous task of jumping down into the net to hook and hoist the often 1000 pound-plus tuna, whose tails may be longer than the fishermen are tall, into the surrounding boats. Most copejadores have suffered many injuries over the years: broken knees, ankles, wrists, and noses. Some people call the practice slaughter, equating it to what they perceive as the savagery of bull fighting, while others perceive it as a noble tradition. 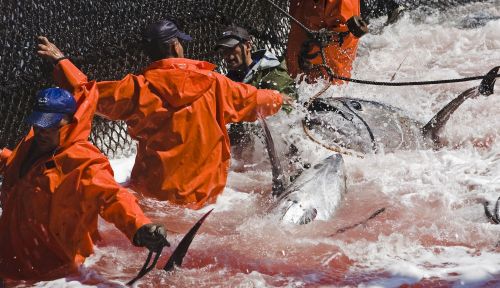 So what is endangering the historic almadraba tradition?

Video of the raising of the nets:

Video of how the almadraba nets work, and a bit of history and geography:

Video of the levantá del atún, right through to the filleting of the meat:

What traditions in your culture are in danger of extinction? How do we determine if it’s time to let go of a practice and flow with the changing times, or hang on to our ancestral practices? And, what makes a tradition a tradition?