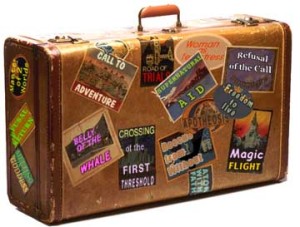 You could say my Mama was a modern-day pioneer. She packed up one suitcase for the three of us — for herself and her two young daughters — and traveled West for the opportunity to reinvent herself, escaping totalitarianism through the seemingly impenetrable Iron Curtain. That was a quarter of a century ago. Still, after so many years, a mother myself, I have yet to truly commune with the place where I live, feeling no tangible connection to the land here.

Why so disconnected? This land seems foreign and not yet part of my “cellular memory” shaped by centuries of Central European living. It is not where my ancestors are buried. In my life, I’ve moved too many times to count, skirting the land, speeding along its slippery surface as if it were ice. Like the original pioneers, and a great many modern-day transplants and migrants, I have internalized the frontier as a state of mind, to paraphrase Native American activist Winona LaDuke. She faults our society’s culture of transience, our belief that a greener pasture lies somewhere else, calling it a psychosis, for disconnecting us from our responsibility to place.

Writer and Mayan shaman Martin Prechtel explains the underlying cause of the westward migration and transient nature of our society as the modern culture’s inability to feed the spirit world from which we come, and our failure to mourn our ancestors which includes acknowledging the damage they have done to this world. He says:

This rings so deeply true for me I weep when I think about it. I live in a new country, a land where I’ve inherited other ancestors’ pain, and I struggle with how to honor it so that I can develop a personal connection and a sense of responsibility to this place. From studying history, I know the magnitude of pain my current life is built on is unfathomable. Between 1774, the year Europeans first arrived on the Northwest Coast, and 1874, an estimated 80 percent of the indigenous population had been decimated by European diseases, including smallpox and measles. According to University of Washington’s Center for the Study of the Pacific Northwest, across the US, “a rough estimate holds that Old World diseases depopulated native societies by about 90% within the first century of contact.”

And the assault on native tribes and the earth continues. In the Pacific Northwest, for instance, as little as three percent of old growth forest is what may be left.

“The question is: how do we respond to that destruction?” Prechtel says. “If we respond as we do in modern culture, by ignoring the spiritual debt that we create just by living, then that debt will come back to bite us, hard.”

In fact, we will literally be — and already have been — haunted by the ghosts of our ancestors if we continue not paying homage to them. “Ghosts will actually chase you,” is how Prechtel describes our predicament. “And they always chase you toward the setting sun. That’s why all the great migrations of the past several thousand years have been to the west: because people are running away from the ghosts. The people stop and try to live in a new place for a while, but the ghosts always catch up with them and create enormous wars and pain and problems, which feed the hungry hordes of ghosts. Then the people continue on, always moving, never truly at home. Now we have an entire culture based on our fleeing or being devoured by ghosts.”

He suggests that one way to honor our predecessors and repay the spiritual debt “is simply by missing the dead. . . as (expressed by) a loud, beautiful wail, a song, or a piece of art that’s given as a gift to the spirits.” If we don’t do this, we are “poisoning the future
with violence” against other beings and the earth itself because we then have no understanding of home.

Prechtel’s insight, I believe, is the answer to healing and to reconnecting us to our past and the earth. In order to “be at home in a place, to live in a place well,” we must do the following, he says. “We first have to understand where we are; we’ve got to look at our surroundings. Second, we’ve got to know our own histories. Third, we’ve got to feed our ancestors’ ghosts” by grieving. We do this by using the gifts we have been given by the spirits to make beauty.”

As global nomads, globetrotters or migrants with no deep commitment to one place we inhabit and its history, we could be doomed. As LaDuke urges, our mantra should be “the Holy Land is here, not somewhere else.”

7 thoughts on “The Holy Land is Here: On the importance of reorienting the nomadic mind”