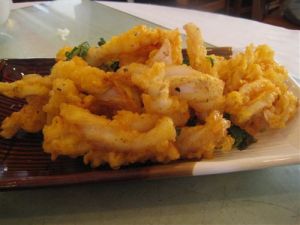 Another terrific guest blog post by Joe Lurie. Thanks, Joe!

What does it say about intercultural and diversity professionals that we seem to just LOVE the food blogs? 😉

After “Bicycling in the Yogurt: The French Food Fixation” appeared (and then Dianne’s Ukiuki Pichipichi article on Japanese food onomatopoeia), a colleague gave me the book, Food in Chinese Culture, published by The Ministry of Culture of the People’s Republic of China.

Long suspecting that Chinese languages, like French, reflect a heightened preoccupation with food, I immediately focused on the chapter, “Food as Metaphor.” There I learned that China’s classics contain many examples of how food metaphors illustrate political, social and philosophical principles. The philosopher Laozi, for instance, observed that “one should govern a large country as one would cook a small fish — very gently.”

Yanzi, another famous Chinese philosopher, noted that “harmonious government, like cooking a fish, requires a proper blend of policy, just as cooking a fish requires the proper blend of vinegar, soy sauce, salt and plum.”  If ministers were blindly to follow their ruler’s behavior, it would be like boiling a fish in plain water; who would want to eat it?

Hearing this, a Chinese friend reminded me that fish frequently are associated with prosperity in Chinese culture, though “climbing up a tree in search of fish,” is to do the impossible.

Chinese philosophers, according to Food in Chinese Culture, also used food imagery to explain literary creation. “It was said that a writer’s ideas are like grains of uncooked rice. When the grains are boiled into porridge, that is prose; when they are fermented into wine, that is poetry.”

In business, “being handed a rice bowl” is to be hired, while “having your rice bowl broken,” is to be fired. A Shanghai-born MBA student explained that if you protest being fired, the boss’ response might be: “the rice is cooked,” meaning it’s too late to do anything about it (my decision is final). Perhaps you should have just performed your duties as “talk does not cook rice.” Still, a Chinese employee might counter with, “I won’t bow for five measures of rice,” suggesting he refuses to do anything demeaning for money. Bottom line: “the squid had been fried,” or he was fired. Because the fried squid is shriveled, there is a serious loss of face.

Some of my other Chinese-speaking students remind me that in business and other activities, one should remember that “if you pick up a sesame seed, you may drop a watermelon,” or lose sight of important issues because you focus on trivial matters. And certainly one should avoid “stale grain and uncooked sesame” — boring unimportant gossip.

According to Gong Wenxiang, author of Food in Chinese Culture, the Chinese word shi means “to eat” as well as “to earn a living.” So perhaps it’s not surprising that “to eat land” means to get income by renting out farm land, while “to eat salary” means to work for wages, and “to eat strength” means to survive via physical labor.

A Mandarin-speaking foodie friend described other “eating” expressions that reflect consuming, digesting, or absorbing. “Stuffing a duck,” to prepare a fine meal, also can refer to studying hard or cramming to ensure excellent test results.  Winning the lottery is to “eat delicious,” prompting jealous lottery losers to “eat vinegar.” And beating mahjong or chess opponents is often expressed as “eating their pieces,” the loser expected “to eat bitter” – to be able to withstand difficulty. Perhaps this is why the plum blossom is a national Chinese symbol. Flowering in winter, it overcomes cold, just as the Chinese people survive and thrive despite hardship.

I remember a US American graduate student telling me his new Chinese roommate at UC Berkeley’s International House asked him, “Have you eaten?” The US American responded, “Not yet. Will you join me for lunch?”
The Chinese student said, “No thanks, I’ve already eaten.” The US American was confused, until someone explained that “Have you eaten?” is a common Chinese greeting which means “How are you?” or “Are you OK?” And, of course, if you haven’t eaten, you’re probably hungry and not ok.

I suspect that the examples here are but a bland reflection of the rich banquet of Chinese eating and food metaphors that are yet to be savored by non-Chinese speakers. After all, according to a Chinese proverb “eating is even more important than the emperor.”

So, an invitation to Chinese-speaking interculturalists, linguists, and anthropologists: please bring on the next course!

15 thoughts on “The Squid Has Been Fried: Language, Culture and the Chinese Food Fixation”