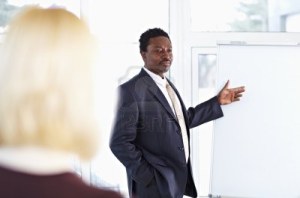 Or: “How to lose a US$1 million investment in less than an hour.”

Cultural Detective and the Case of Who’s in Charge

This case takes place in one of the world’s largest companies. The company has recruited, at much expense, a leading Nigerian scientist to head up a project; he is perhaps the only person in the world with the unique knowledge base, experience and connections needed to see this major project through to fruition.

The company has gone to great expense to relocate the Nigerian project manager to western Europe, and to assemble a cross-functional team of the company’s leading professionals to aid with the project. The project is of huge significance for the company. The plan is that it will break new ground and shift the way such projects are implemented worldwide. There is much hope and excitement, as well as huge investment and anticipated return, riding on it.

The project manager, the Nigerian scientist, calls a meeting with three of his team members. All four people greet one another in English, shake hands, and sit at a table for the meeting. The project manager introduces the agenda, in English. After a few minutes the discussion seems to naturally shift from English into the local language, and continues for about 45 minutes.

At the conclusion of the meeting, the four gentlemen stand up, again shake hands, and shift back to English to congratulate one another. One of them says, “I think we have devised an excellent plan.”

The project manager replies, “Oh, yes? And what would that plan be?”

The Nigerian responds, “I didn’t understand a word you were saying. I don’t speak that language.”

“Why didn’t you say so?! We could have switched to English!!” The others’ mouths drop open in disbelief at this waste of time, and the scientist’s failure to speak up.

“I am the project manager. I called this meeting, and I started it in English. All our correspondence has been in English. You all changed the language. It is a power play. Your colonialist ways never seem to change.”

After this meeting, the project manager requested his removal from the project. It appeared this hugely anticipated effort was dead before it had even gotten going!

An orientation to cross-cultural collaboration, including work on understanding and learning to deal with issues of post-colonialism, may have prevented this rocky start. There are times when, once mistakes have been made, there is no rescue or remedy. Convincing these team members to give it another go, to get past their doubts and discuss ways of respectfully and productively working together, required skilled facilitation. The project manager was convinced that his team members were racist, and the team members were convinced the project manager was overly sensitive. Both thought the other arrogant.

1 thought on “The Case of Who’s in Charge: Whose language will we speak?”