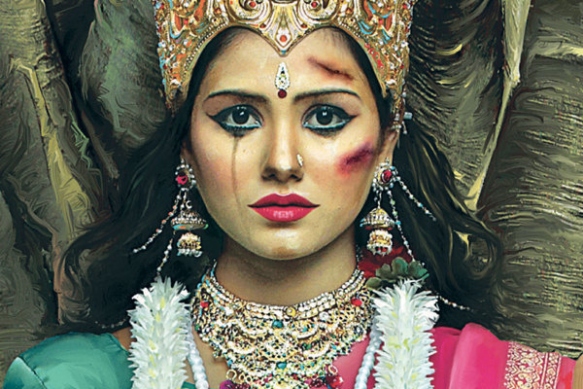 According to the World Health Organization, violence against women is a worldwide epidemic. Findings from the first extensive research of its kind, published in August 2013 and conducted by the World Health Organization, the London School of Hygiene and Tropical Medicine, and the South African Medical Research Council, show that 35% of women worldwide experience either domestic or sexual violence! Globally, as many as 38% of all murders of women are committed by intimate partners. And this, despite a 1993 United Nations Declaration on the Elimination of Violence Against Women. This unacceptable reality is not limited to any one region of the world, as you can see in the map below. 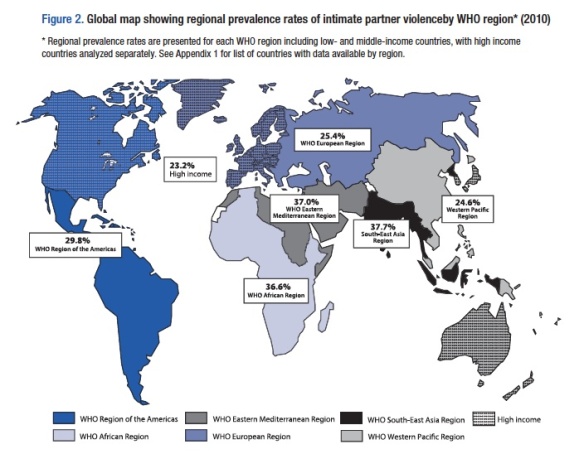 Both men and women are victims of domestic violence, though worldwide statistics show that four-out-of-five victims are women. I know this epidemic first-hand: domestic violence knows no boundaries of ethnicity, socioeconomic level, or education. While physical abuse is against the law in the USA, thankfully for us, mental abuse is not and can be far, far worse.

Save Our Sisters, an initiative of the NGO Save the Children India, recently returned to my attention when they released a dramatic series of ads designed to stem the tide of domestic violence. The ads show three bruised and battered Hindu goddesses (Durga, Saraswati, and Lakshmi), along with important statistics—68% of women in India are victims of domestic violence—and a helpline number. The campaign, blending hand painting in the traditional style with photography, was created by the Mumbai-based advertising agency Taproot, and it has already won several awards. You can see the three ads in the slideshow below, along with another closeup.

Recent reports show that one Indian woman is killed every hour just in dowry-related crimes! Most people that I have spoken to in India find the “abused goddess” campaign highly effective: it grabs one’s attention, it is culturally appropriate, and it seems to be raising awareness and reporting. In sharing the campaign on social media, however, I especially found one response (from Darshana Davé—who has given me permission to use her name and asked that we link to her email) insightful:

“It’s a good, effective campaign, but why must it be that only goddesses, mothers, sisters and daughters be treated well? Why can’t Indian men treat all women with respect? Those questions remain unanswered… A powerful campaign, but it also is guilty of perpetuating the goddess versus whore stereotype, where the woman is either a goddess, sister, mother or daughter, who should not be abused, or if not those, a whore, who can be abused.”

Darshana also shared this provocative (though challenging to wade through) article, entitled, “No more goddesses, please. Bring in the sluts,” which I feel makes some valid points—and I do love the title.

What do you think? Have you seen culturally appropriate campaigns to eliminate violence against women where you are? If so, please share!

Violence against women is both a major world health issue and a human rights problem, as indicated in the diagram below, from the same WHO report. 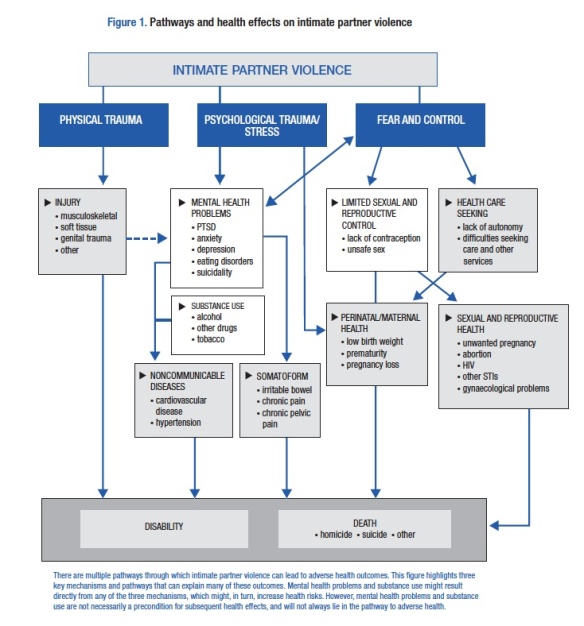 In Mexico, where I live, we suffer an epidemic of “lost women,” women who just disappear one day, never to be seen again, victims of sexual violence and murder. Violence against women is a systemic problem, a societal and cultural problem. We need to stand up, to speak up, each of us, in our families, with our friends, neighbors and colleagues. We need to use our cross-cultural skills to help people realize, in ways that make sense to them, that violence is never appropriate.

“There is one universal truth, applicable to all countries, cultures and communities: violence against women is never acceptable, never excusable, never tolerable.”

Today as this blog post was published, I happened upon this particularly powerful and discouraging article from the Harvard Gazette. If this topic interests you, be sure to read it and let me know what you think.

Also, do not miss this just-released UNDP study on preventing violence against women in the Asia-Pacific region.