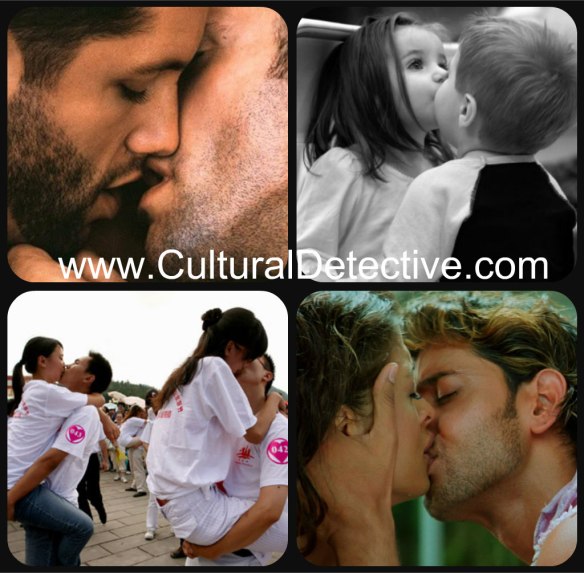 Kissing customs vary by culture; we all know that—when greeting, do you kiss, bow, shake hands, hug, fist bump, or use some other gesture? If you do kiss to say hello, do you do kiss once, twice or thrice? Do you kiss the lips, cheek or air?

But when it comes to kissing a lover, to passionate or sexual kissing, well, suddenly we think that is surely universal.

But is it? Are statements such as those below ethnocentric?

Researchers have discovered kissing helps you choose the right mate and helps you live longer. They have found you use 146 muscles when you pucker up and swap 80 million new bacteria when you lock lips. And you will spend some 20,000 minutes — or two weeks — of your lifetime doing it.
—The Washington Post

According to a recent study of 168 cultures worldwide, romantic-sexual kissing is actually far from universal. In fact, the study shows that only 41% of the world’s cultures engage in romantic kissing! Researchers on the project were anthropologists William Jakowiak and Shelly Volsche, of the University of Nevada Las Vegas, and gender studies researcher Justin Garcia, from Indiana University Bloomington. The paper, entitled, “Is the Romantic-Sexual Kiss a Near Human Universal?”, was published in The American Anthropologist in July, 2015.

Many societies that do not have romantic kissing use other physical expressions of endearment, often an exchange of breath or mutual sniffing of cheeks and necks. The Oceanic Kiss involves passing open mouths, with no contact. It is usually a greeting, and occasionally part of the sexual repertoire. Are you curious about other sexual customs and beliefs that may be culturally relative? If so, check out this article in Bustle.

Cultural Detective is a terrific tool for exploring the methods you use to build trust with and confidence in others, whether they be romantic partners, work colleagues, neighbors or clients. We invite you to join us in one of our complimentary webinars to learn how.