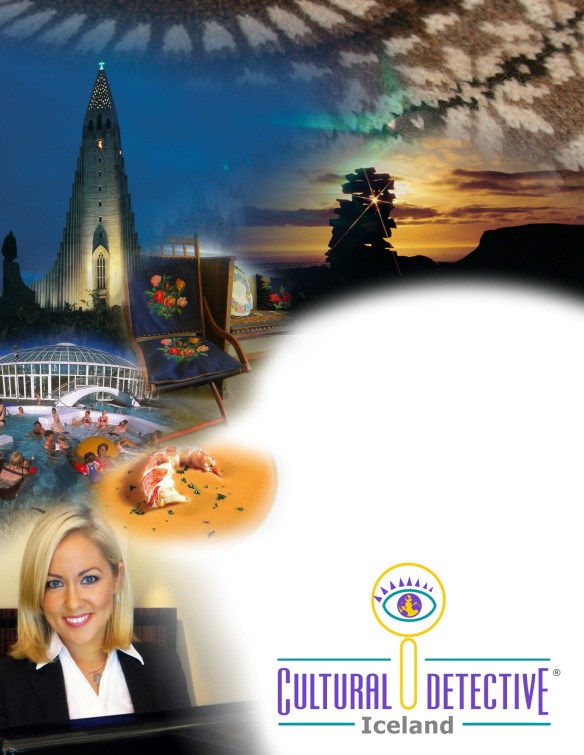 It’s hard to believe that we have finally completed the Cultural Detective: Iceland package! This project spans more than five years, with some stops and starts. After working long hours in Iceland, in the USA, and on Skype, the emphasis was always on finishing what we started with high quality. We were both certain that, in spite of our busy work schedules, other duties, and familes, it would sort itself out, and we would manage to complete this project.

Erla on the left, Thorunn on the right

We were introduced to each other on a beautiful sunny day in Iceland in 2008, and that very day Thorunn asked Erla if she would be interested in collaborating on the Cultural Detective: Iceland project. We immediately “clicked” and decided to meet again and discuss the idea of working together. Throughout this collaboration we learned a lot about ourselves, about each other, and about our culture and what it means to be an Icelander. Through thick and thin, stressful moments, a lot of laughter, travel between Iceland and North America, we established a wonderful friendship for life.

It is perhaps fitting that Cultural Detective: Iceland is announced on Facebook during Thorri season, when Icelanders celebrate in ways no one else in the Western World celebrates: by eating fermented food and using anise or caraway-flavored snaps to help swallow it!

This mid-winter season in Iceland is called Þorri (Thorri), and according to the historic Icelandic calendar it starts on January 23rd with Húsbóndagur (Husband Day) and ends on February 22 with Konudagur (Women’s Day). At this time of year, Iceland is cold, dark, and windy. But because the sun rises at about 9:30 am in the morning, it is a whole lot better than in December, when it rises at 11:30 am—so it is time to celebrate as a way to get through the Thorri season! The celebration is called Þorrablot or celebration of the Nordic God Þór (Thor).

These parties are usually attended by people belonging to the same social group such as a fireman’s association, an association of people from a particular fjord, or people who work for the same company, etc. The entertainment varies from a stage performance, to a comedian as Master of Ceremonies, to people making speeches and reciting Icelandic poetry, and usually ends with lots of dancing and singing of national songs. The staple foods at these parties are pickled ram’s testicles, boiled sheep’s head, blood sausages, liver pudding, smoked and cured lamb, and dried fish. Some people have to be “manned” into eating these things, and some parties have these delicacies as side dishes rather than as the main dishes.

Below is a video of Þorrablot at CCP, an international company headquartered in Iceland. A new employee from Denmark has been invited to this celebration. Can you imagine his culture shock?!!

So how do we translate our wonderful yet, at times, strange culture into a manageable frame for others to understand? This was our task as co-authors. It was not easy, but surprisingly rewarding. After interviewing foreigners living in Iceland, and Icelanders working abroad, we began to see the values system emerge.

We struggled quite a bit about which values to highlight through the Icelandic Values Lens. The more we talked to people, the clearer it became to us that Icelanders hold their language as central to the culture. So strong is this value that Icelanders believe that for anyone to be able to work in Iceland, even in menial jobs, they need to learn the language. To support this value, Icelandic companies who hire foreigners generally offer Icelandic lessons during the lunch hour.

Every culture has some things that cannot be translated. In Iceland, one of those things is the phrase, “þetta reddast,” literally translated into English as “it will work out.” However, in English, this phrase seems more of a hope than a reality. In Iceland, we understand the phrase to really mean “things will sort themselves out” and, in the end, they always do, somehow.

Because immigration is making the country more diverse and the travel industry is growing, there is a definite need to enable Icelanders to be more open and knowledgable about cultural differences and gain cultural competency. In addition, Iceland’s economy is export-driven and becoming more integrated into the world economy, so it is important for outsiders to learn how to work with these very direct, honest, and hard-working people with a great sense of humor.