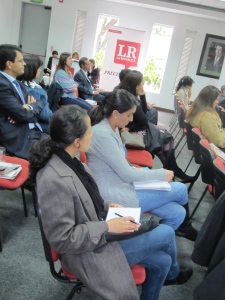 Many of us have found ourselves in the difficult situation in which people ask us to equip others to be cross-culturally effective and globally competitive – and then give us just a few short hours to do so.

Such was my task recently in Bogotá. The Colombian government had just signed a Free Trade Agreement (FTA) with the USA, and I had been invited to work with a lawyer and a business consultant, so that the three of us could, in five hours (ok, we started a bit later than scheduled, so really 4-1/2 hours), better enable local businesses to make the most of this new opportunity. My colleagues were excellent, and thanks to terrific teamwork and generous sharing of expertise, we were able to take a very diverse group of enthusiastic participants a long way in a short time.

I thought some of you might find the design useful for adapting to your own needs. 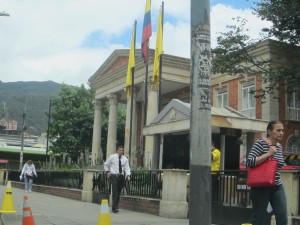 Advertised Session Objectives: Learn how to make the most of the new FTA, how to conduct business at international levels of quality and competitiveness, and how to negotiate effectively with US Americans.

Legal Aspects of the FTA – one hour

First, a very talented international lawyer, Andrés Forero, based in Bogotá, walked us through the various aspects of the new FTA, including a summary of the opportunities it presents for Colombian businesses. This was a most interesting session; Andrés knows the FTA inside and out, and he knows Colombian business. He took the complex and made it practical and understandable. He motivated those in attendance by explaining about the huge opportunities. And he also scared us a bit, telling tales of cross-cultural failures that he’d witnessed. Of added interest was the fact that he had been involved in translating the text of the FTA into English, and showed the full two volumes to the public for the first time ever.

Negotiating with US Americans – 2 hours

The extremely talented business consultant with whom I was working, Ing. Fernando Parrado, and I decided that we needed to just “jump in” with this group and immerse them in a case study of a typical Colombian-US negotiation. So we did. We told the story, and we debriefed it using the Cultural Detective (CD) Worksheet. This took about 45 minutes.

Once we had the Worksheet completed, we urged the participants to reflect on what they had done. They saw two different world views, two different approaches, both “correct” and both with value. They saw connections between actions and values, and that values and beliefs motivate behavior. And they saw that really effective strategies use the resources provided by all parties. This took another 10 minutes.

From there we introduced the three intercultural capacities on which Cultural Detective is premised (subjective culture, cultural literacy, cultural bridge), and then reviewed instructions for using the CD Worksheet/the CD Method properly. This took another 15 minutes or so.

Focusing on the US American values section of the now completed Worksheet, we began talking about what is important to US Americans. We defined the concept of culture, cultural diversity, and cultures such as regional, ethnic, socioeconomic, gender, and generational. We made sure participants understood that when we generalize we want to talk about central tendencies of a group of people. We don’t want to stereotype, to “box” an individual into the central tendency of the group.

Then we introduced the concept of a Values Lens: that there are core values or central tendencies of a group of people. And that for each value there is a negative perception, that is, a way in which it can be viewed negatively by those who do not share the value or its expression. I told the participants, as I always do, about the danger of the Values Lenses. I cautioned them not to use them as yet another box into which to fit people, but rather as a tool for discovery, as clues for analysis. The values might apply to the situation, or they might not; they are a guide, a place to start.

These last two items took another ten minutes. It was quick. We covered a lot of territory in a short amount of time.

From here we introduced the US American Values Lens, sharing sample behaviors for each value, and sample negative perceptions. We asked participants if the Values Lens provided them any further clues to understanding the behavior of the US American in the case study, and indeed it did. Participants shared their stories of working with US Americans, and we were all able to learn from one another. This part took about 30 minutes.

Then we took a short break to eat some wonderful cheese-filled pastries and drink some of the famous Colombian coffee.

We came back from break ready to experience the debut of Cultural Detective Colombia. And what a debut it was! Fernando walked us around the Colombian Values Lens, sharing a story about each value, and explaining how to use it as a strength in working across cultures and making the most of the Free Trade Agreement. He also explained the Negative Perceptions for each value, again with illustrations, and positioning them as skills or competencies to develop when working internationally, at global standards.

Participants, who came in feeling that they had to “change” in order to be successful, now glowed with pride that they already held within them a heritage to be proud of, and onto which they could wisely add cross-cultural competence.

We again asked the participants if the Values Lens provided any further insight into the critical incident, and they found that it did. They enthusiastically declared the accuracy of the Colombian Values Lens. I felt very fortunate to be present for its debut.

This portion took about 45 minutes. While it was not requested by the client, it was an aspect we knew was very important if the participants were to achieve their objectives.

I am not an ethics professional, but the Cultural Detective Global Business Ethics enabled me to be able to define the topic of ethics in an understandable way. More importantly, I was able to explain the difference between compliant and ethical behavior, and the grey areas created by cultural differences: an action might be “non-compliant” yet seen as the ethical or right thing to do, or an action might be “compliant” but seen as unethical or wrong from a cultural perspective.

With the help of Andrés, our lawyer, we introduced the CD Global Business Ethics Values and Negative Perceptions, using real-life examples. We then asked participants if the values from this ethics lens provided further insight into the Colombia-US negotiation case study. Indeed it did! We also asked them to overlay the Colombia Lens with the Global Business Ethics (GBE) Lens, and the USA Lens with the GBE Lens, and the huge contrasts were apparent. They saw the difference that culture makes on perceptions of right and wrong. Unfortunately we were only able to spend about 30 minutes on this portion.

Why such a short time on Global Business Ethics? Because I knew that, if these people were to succeed in global business, they also really needed a grounded understanding of who they were as individuals. Thus, we gave participants about 15 minutes to fill in their own Personal Values Lenses, using an exercise and Lens from Cultural Detective Self Discovery. They could then easily compare their Personal Lens to the Colombian Lens and the USA Lens, as well as the GBE Lens. 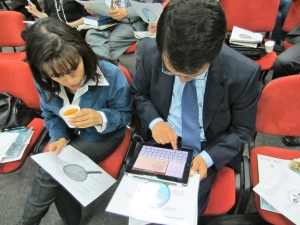 In closing, we passed out laminated copies of the 75 or so Lenses in the Cultural Detective series, so participants could get a feel for how they might adapt their approach to a German or an Israeli or South Korean marketplace.

All in all, it was a very fast romp across a very broad territory. But, oh, the insights the participants gained! They left the room in the evening standing tall and looking enthused, which I tend to take as a very good sign.

Fernando and Andrés, thank you so much for this opportunity to work with you both in this way. It is not often I have the pleasure of working with people for the first time and we are able to find such synergy of talents; it was truly a privilege and a joy!

Everyone: what do you think of this design? What are your strategies for doing the impossible in a very short amount of time? I’m eager to hear!